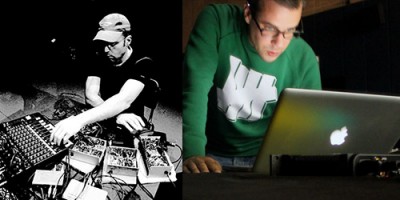 Gert-Jan Prins (NL) focuses on the sonic and musical qualities of electronic noise and investigates its relationship with the visual. His works includes live performances, sound-installations, compositions, electronic circuits, and collaborations with composers, musicians and visual artists.

Martijn van Boven (NL) combines the techniques and possibilities of modern image processing and creation within the context of expanded cinema and early computer generated films. His work includes video- installations, films, collaborations with composers, and live cinema performances. He has been head of Interaction Design at the ArtEZ Institute of the Art since 2012.


Light and sound engraving on weathered concrete created by scanning the architectural elements of a bunker wall. Verticality as a concept of resistance. The freezing of time to its absolute limit, made visible as a monolith. This resilient anti-tank wall from the Second World War was used as metaphorical time block in which it served as a projection screen for the imagination and musical expression of resistance. Thus the Walzkörpersperre, itself an object of conflict zone and delay tactics, became exposed to a barrage of light beams driven by electronic sound. The wall, weathered by time and nature, reveals itself in a complex game of asymptotic lines, scratches and light planes.

MB Can you tell me about the ideas behind Walzkörpersperre?
MvB Walzkörpersperre is really a film about rudimentary aspects – the purity of light and electronic signals being transposed into electronic sound. The idea of verticality is like an obstruction: you can’t enter it, and you can’t pass through it. The horizontal axis is much more inviting, while the vertical is more about prevention and delay. I don’t know where in the process we thought of working inside a cave, but that turned out to be too complicated so we came up with the idea of using laser lights inside a bunker. Gert-Jan suggested projecting on the Walzkörpersperre, which is two huge concrete blocks that are part of a 1.5 km long, four-metre tall, German anti-tank wall dating from World War Two in the dunes outside Amsterdam. These blocks can be raised to allow traffic to pass and lowered to thwart an enemy advance. Because they blocked and reflected the light from our laser beam, they thus enabled us to visualise the patterns created by the laser light, and this perfectly suited our concept of obstruction.

GJP Martijn came up with the idea of using a laser and projecting it onto a stone or a wall. It reminded me of scribbling with chalk on a school board. Then we thought of stalagmites and stalactites in a cave as metaphorical objects that grow into vertical clocks over thousands of years. Initially we wanted to scan them with a laser and capture these extremely dense time capsules. In the end locating a suitable cave within the short time span of the production was too difficult.

MB You mention verticality as a concept of resistance…
MvB That’s the idea behind a wall. It’s about a delay. It is not that you can’t enter. It is a line of delay. It sets a boundary – you’re forbidden from going somewhere. I think this is what the film shows. You simply have to accept it.

GJP While thinking about what verticality is, we remembered one of the most enduring vertical images from recent history: Nazi banners. Third Reich banners were vertical and it was via the notion of these vertical flags that we arrived at aspects of war, oppression, stagnation and the architectural consequences of these concepts.

MvB In that sense the film is a cinematographic monument to war and conflict. What we were doing also sometimes reminded us of the aesthetics of Anselm Kiefer. His work is highly influenced by post WWII sceneries of destruction and decay.

MB What do we see in Walzkörpersperre?
MvB Light projected onto a German anti-tank wall…

GJP We made our own laser control unit that we took to the bunker with all the other gear: several electronic signal generators, two cameras and two laptops to control the aperture and long exposure times, and food.

MvB This setup enabled us to project several light paths on the anti-tank wall simultaneously. We experimented with different exposure times. If something looked interesting we set it to 1000 images. The laser created shapes for 45 minutes that were filmed by two cameras recording in or slightly out of sync and with different time exposures to make dissimilar images… a simple system of electronically controlled light-scribing. In the past it could be done with a torch, but we used an electronically controlled laser and computer-controlled cameras.

MB The film is compiled from different sessions?
MvB Yes. In the end we had approximately 15,000 frames of rough material. We didn’t really have an idea how to make a composition from it. But we did have the basic material: a wall, a bunker, light, a signal and the vertical aspect. We decided to use the material without any digital manipulation. Pure frames. That’s why the film hard cuts from one section to another. This is a compilation of footage without any cross fades or digital effects.

MB What about the soundtrack?
GJP We thought about making a soundtrack from our location recordings. But not all of them were suitable so I recorded some sounds, ran them through the mixer and played with them using my electronic instruments, which were actually also used to make the film. We had several live sessions at Martijn’s studio for two days, working in parallel.

MB Two films in the Vertical Cinema programme were made with the Synchronator, a device made by you, Gert-Jan Prins, and Bas van Koolwijk.
GJP That’s something we didn’t anticipate. Bas and I are very proud of this. It also shows that many artists can work with different techniques and technologies such as the Synchronator for Vertical Cinema. We decided to step outside our comfort zones and use a hacked laser outdoors.

MvB That’s exactly what I like about this project. We had less than a month to realise our film and yet we used a completely new approach. This gives the film a certain freshness. It was made outside our own confined way of working, which would have been much easier to do, of course. We had so little time to figure everything out. I think this pressure also resonates in the film. We spent four nights at the bunker. It had to be good weather. It was quite a chore to get the equipment there. We had to sort out electricity… Each day had its problems. But we had to be resolute – this is what we want to do and we aren’t going to change it. I think this is also evident in the film. It begins immediately, there are titles, sound, and it lasts for 11 minutes and 11 seconds without any kind of reflection. It just burns out this energy of light and sound.

MB Did you feel pressured by the commission?
MvB To me it didn’t feel like a commission, not at all.

GJP If we’d worked within our own domain it might have felt more like a commission. But we used new machines, we experimented…

MvB It was a month of working with pleasure, solving problems and really focusing on the result. The only thing that was specified beforehand was the vertical aspect. Well, that in itself already has a fundamental and decisive impact on the results.

MB Now that you’ve seen your work printed on celluloid, is it very different to what you saw on your computer screens?
MvB Totally! The tactility… We tried to envision that. You have light from the projector going through the celluloid. You have the laser light-scribing or ‘engraving’ on the wall. And then you have it ‘engraved’ on the celluloid. The monumentality comes from there.

GJP It is a nice coincidence that Walzkörpersperre was translated to celluloid with a laser.

MvB Yes indeed, the Vertical Cinema project shows how a simple yet fundamental change in a medium can generate new connections and associations in film culture, as well as new technical possibilities for artistic expression.

Excerpt from WALZKÖRPERSPERRE on Vimeo . 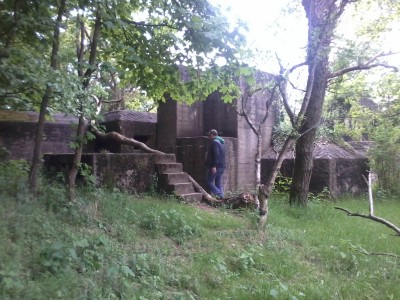