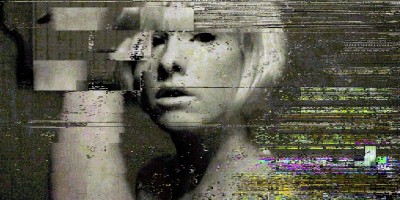 Rosa Menkman is a Dutch artist/theorist who focuses on accidental visual artefacts in analogue and digital media. The visuals she makes are the result of glitches, compression, feedback and other forms of noise. Although many people perceive these accidents as negative experiences, Menkman emphasises their positive consequences.

Previous: Persistence of the Vacuum Without Grounding Definitions Next: Louver
LUNAR STORM BY ROSA MENKMAN
4’15’’
COLOUR

The surface of the Moon seems static. Though it orbits the Earth every 27.3 days, with areas of it becoming invisible during this rotation, it is always (visibly or invisibly) above us, reassuringly familiar. The Moon is the best known celestial body in the sky and the only one besides the Earth that humans have ever set foot on.

The Seas of the Moon (Lunar Maria), consisting not of water but of volcanic dust and impact craters, appear motionless to the naked eye. Here, volcanic dust forms a thick blanket of less reflec- tive, disintegrated micro particles. But on rare occasions, beyond the gorges of these Lunar Maria, and only when the lunar termi- nator passes (the division between the dark and the light side of the moon) a mysterious glow appears. This obscure phenomenon, also known as lunar horizon glow, is hardly ever seen from Earth.

Beyond the gorges of the Lunar Maria, the Moon is covered with lunar dust, a remnant of lunar rock. Pummelled by meteors and bombarded by interstellar, charged atomic particles, the molecules of these shattered rocks contain dangling bonds and unsatisfied electric connections. At dawn, when the first sunlight is about to illuminate the Moon, the energy inherent to solar ultraviolet and X-ray radiation bumps electrons out of the unstable lunar dust; the opposite process occurs at dusk (lunar sunset). These electrostatic changes cause lunar storms directly on the lunar terminator that levitate lunar dust into the otherwise static exosphere of the Moon and result in ‘glowing dust fountains’.

Excerpt from LUNAR STORM on Vimeo .