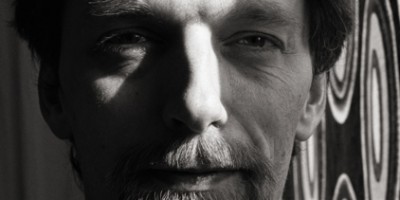 Joost Rekveld (NL) makes abstract films, light installations, and live projections. He explores the sensory effects of systems he designs, often based on concepts from physics and biology. These systems combine temporary dogmas (in the form of rules or code) with open elements such as material processes or networks of interactions that are too complex to predict. His works are composed documentaries of these explorations. One of his most famous films is #11, Marey Moiré (1999). Rekveld also works in theatre, curates film programmes and writes. Since 2008 he has been course director at the ArtScience Interfaculty of the Royal Conservatoire and the Royal Academy of Art in The Hague.


The images in the film #43 are generated by systems in which the pixels are agents that are, in some respects, comparable to organic cells. These systems are bumped into motion by disruptions that cause a difference between some pixels and their neighbours. These miniscule differences become seeds for processes of decay and growth, an imbalance that embodies a store of energy for the system as a whole, similar to electrical potential. Under some circumstances the cells in the system feed each other so that oscillations or other kinds of order are produced spontaneously, sometimes stable in themselves, sometimes feeding on noise to stay active.
This film is part of a long-running exploration of algorithms that are based on propagation and local interactions. Originally triggered by an encounter with simulations of how nerve impulses organise themselves into oscillations in tissues like heart muscle, for example, the project has since expanded to include an interest in the more general emergence of patterns in time and space out of homogenous starting conditions. These explorations are inspired by a set of ideas from biology and mathematics that first came to prominence during the development of cybernetics in the 1950s and 1960s, and that have since evolved into more recent manifestations such as catastrophe theory, complexity theory and artificial life.
The composition of this film was influenced by the work of logician G. Spencer Brown, who wrote his Laws of Form in 1969. The book is a wonderful account of a new kind of logic that lends itself especially well to describe the seeming paradoxes of selfreference.

MB What do we see in your vertical film #43?
JR What you see are the processes that run in a computer simulation. It’s built around pixels and the way they react to neighbouring pixels. Lots of people are interested in complexity and chaos nowadays. But in this film I worked with a very specific class of complexity, where you have regular processes that are somehow fed by noise. What you have is something analogous to cells that absorb energy from the environment and use it to sustain themselves. It’s a kind of oscillation that sustains itself by sucking up the noise from the environment, which I find is a very beautiful metaphor or principle. I set up a couple of these situations, all slightly different and tuned to different types of images, and I made them move. All the chapters start with a white rectangle or a square, and I generated all the images that follow, especially the edges. The difference when one part is white and the other is black sets the processes in motion. Basically, I create some pixels in the beginning and there’s a little bit of noise that you can’t really see, but it’s there, and this is the energy source of these situations.

MB You just touched on some aspects of biology, mathematics and cybernetics that influenced your thinking about this film. Elsewhere you also reference G. Spencer-Brown. Can you tell me something about this?
JR There’s a book by Spencer-Brown called Laws of Form. It’s about logic and is so transparent that it’s hard to see whether there is anything really there. [Laughs] You read it and you say: ‘OK, one and one is two. OK.’ I had to actually read around it to understand how very interesting it is. There are two links to the systems I use in this film. He talks a lot about feedback, he develops it logically, and it is very well suited to describe paradoxes, for instance. A paradox like ‘I am lying’ is a self-referential statement, so it’s either true or it’s not – but if it is true then it isn’t true… You have these cycles that are very similar to the things that occur during feedback or negative feedback. The other aspect is that his logic is a graphic logic. It doesn’t talk about zero, one, true, false; it makes distinctions on a piece of paper. And that’s very closely linked to this idea of making distinctions on the screen. These relationships aren’t very direct, they’re more an inspiration, and it would be great to make a film based on this book. I don’t know how it would work out, but if it did, it would be an interesting film.

MB Did you think about the vertical aspect before making this film or would it have been the same had it been horizontal?
JR Although I didn’t really think specifically for the vertical format, the choices related to it differ greatly from those for a horizontal film. So even though it’s abstract I wouldn’t consider showing it horizontally. It most likely wouldn’t work. But I could make a horizontal version of this film with a similar setup. I realised what it is I like about these algorithms, these kinds of systems: I begin a process by making a distinction between two parts of an image. I’ve done this in many different formats – normal projections, palm-tops, in theatres… So because these algorithms start from this kind of distinction, the screen is the basic distinction. I’m thinking of ways I can relate to it more. The rectangles I start each chapter with are associated with that.

MB How did you edit the film?
JR I’ve never really edited very much since I started making films. I experiment a lot and I think about the kind of structure that fits the material. At some point I make a skeleton time structure. Then I make sequences that fit into this time structure. The editing I do at the end is really a little bit of tweaking. The film is structured around zooming in on how the oscillations begin and sustain themselves. That’s the drama, you could say, and it’s divided over several chapters.

MB You also made the soundtrack for this film. Tell me a bit about it?
JR When I began making films I also wanted to make my own soundtracks. I made the image and sound for my very first film, #2. I’ve also composed soundtracks for other people. I very much like the idea of composers and their methods of composition, so I use these when I edit, or compose, my films. I did make silent films for a long time and then began working with composers again to have a dialogue with sound. This is the first time in 20-something years that I made my own audio. I experimented for a while in combining soundscapes with abstract images because they situate the images in a way that is much closer to how I think about these processes. It isn’t a glimpse of some sort of abstract mathematical virtual reality somewhere far away, but perhaps a different view on things that are here. Soundscapes have lots of connotations. But they have an effect even if you cannot actually connect an image to a sound. It situates the image in a real environment. There are two videos by Steina and Woody Vasulka – Reminiscence and Telc [both 1974] – in which the images were generated from video and then transformed into abstract scapes using their video synthesizers. But the sound is just a direct take from the camera. It’s fascinating. You see stuff happening while you hear sheep bleating, creaking floorboards… it creates a very interesting tension.

MB Do you write your own software?
JR Yes, I started doing that quite a while ago. I used to make films with self-built mechanical optical machines. At some point I wanted to do stuff that was too complicated to achieve mechanically. It’s better to write a piece of code that does it. Instead of a computer controlling an optical machine, I have a computer controlling a piece of software. In that sense, the methodology is almost the same. When you work with actual physical machines there are always issues you can’t predict. These complex systems share many similarities with this. I’m in control to a certain degree, but in many situations not…

MB And you’re also surprised by the results…
JR Yes, definitely! I’m writing my own software environment that I can use to render images in live situations as well. The film #43 has just been screened for the first time, but I’ve done performances with similar algorithms, and also used them in projects for V2_ such as Palm-top theatre… I prefer to develop my ideas in small steps rather than work in seclusion for ten years and then, suddenly… a film.

MB What did you think about printing your work to film? You used to work with celluloid…
JR Before I started working with computer-generated images in the direct sense I experimented a lot with film. In some ways I was more aware of the qualities of the material. It’s always surprising that some aspects of these images can change quite dramatically after translation. You always have to adjust to what it has become when you see it for the first time, and you also realise that some things are different from what you made. But that’s something you’re aware of while you’re busy. When I saw #43 I realised that it’s a very fragile film because the details are so fine. And it was really only possible with this fantastic projection setup and the knowhow to do it. Showing something like this in a regular cinema would be difficult, to say the least.

MB Commissioned films are pretty rare in experimental cinema. In that sense the Vertical Cinema project also goes beyond the normal. What were your thoughts about that?
JR This is the second film I’ve made as a commission. What I liked about it was the very definitive format – the deadline! [Laughs] It also excluded lots of things. I’m quite happy to work on a film for eight years, following my own logic completely and ignoring any external concerns. But on the other hand, if you work in a theatre you’re one cog in a big machine. I really like those contrasts. It’s refreshing to have rules: it’s large, has a different ratio, and has to be finished in three months… It’s liberating because you can actually try many different things in a very short time. 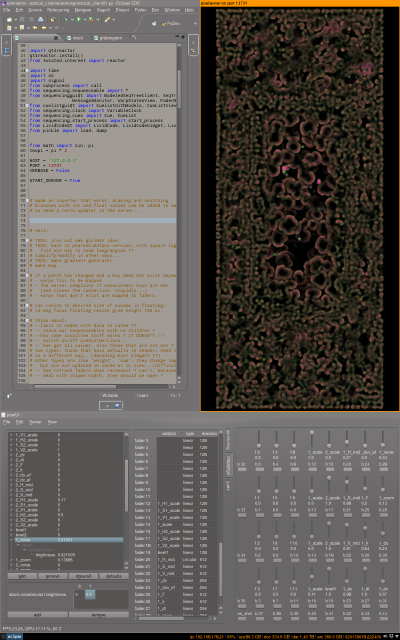 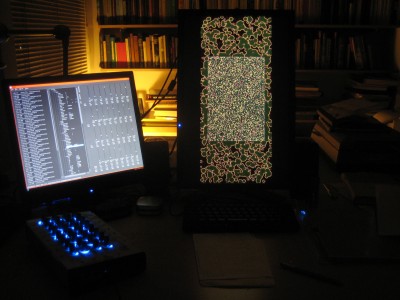