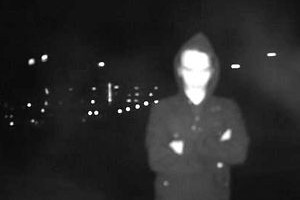 Manuel Knapp (AT) works in between visual and sound art. He studied painting and graphics at the Academy of Fine Arts in Vienna, and computer music and electroacoustic media at the Institute for Composition and Electroacoustics in Vienna. He has been active as a noise musician and visual artist since the 1990s.


The vertical plan of V~ demonstrates – in the sense of presenting evidence as well as in the sense of a projection – the process of creation from forces of numerical matter. Geometric objects constantly create and destroy themselves. Our perceptions are challenged by an immense diversity of forms that arise without following the evolutionary logic of a genesis, but continuously recreate themselves in a sublime flow of force through extinction; lines and surfaces appear and expand according to invisible rules, they vibrantly blend into landscapes, disappear and develop new formations.

One can speak of an ecstatic sound production as well as a negative vitalism that stages the (auto) generation of numbers and their ephemeral composition as the expressiveness – a sensuality of expression – of software codes. In early ancient times, mathemata meant what we could learn from things and what they meant. Only later was the term related to working with numbers. It seems that the numerical has been hiding in objects for a long time, and the kinetic graphisms of Manuel Knapp can thus be understood as an old lifeform that has been moving and eating its way steadily through dark space since the beginning of time. (Marc Ries)

MB What do we see in ~V? In his text about the film, Marc Ries uses the phrase ‘the forces of numerical matter’…
MK It’s a kind of a negative life form, like an ancient creature that has always been here. Geometric shapes, figures and lines are lifeless in themselves, but here the movements of shapes and grids bring them to life… they become a kind of organic geometry. It perpetually creates and destroys itself. I work in a totally experimental way. When I start I don’t have a particular idea of what I want to create, so I try things out and learn from the errors the software or I make. I start composing with this information and create an environment. So, yes… it’s about the forces of numerical matter.

MB Tell me about that environment.
MK The interesting thing is that it always depends on the camera perspective. The software or the environment I work with is infinite. It is in this black and endless space that I start to create something. For example, if this [points to the audio recorder] is a scene or an object and you put the camera here, you have different view than if you put the camera further away and see the entire object. In this case the camera is a bit closer, so you see more of the architecture of the space. If the camera were a bit further away this would become an object. You would see the life form itself. Now it’s more abstract because it’s more ‘inside’. I had ten different views of the environment I created and I had to choose one – not easy because all of the angles were appealing. I didn’t want to cut from camera 1 to camera 2 so I had to choose one take.

MB You don’t film live, you render and see what’s there.
MK Yes, it’s like drawing or sculpting. You have to get a feeling of time, you have to think in frames, so it’s quite difficult to calculate the speed of the movement. It’s very interesting to only work with computer-generated data because when I paint or draw, it’s completely analogue. Working with and in-between digital and analogue is always what makes it interesting.

MB How did you make the sound?
MK I used sounds that I created with synthesizers and effects that I digitised and used in a multi-track piece composed with software. It’s a totally opposite approach from the image, which is completely digital – created on a computer and then transferred back to analogue.

MB How did the idea of a vertical format influence ~V?
MK It mattered a lot because it’s a different format. If you paint it makes a difference if it’s vertical, or square or whatever, and so does the size. I’m a painter, and painting is something I’m passionate about. I’ve made vertical works before, but these were for television screens. You could just turn the screens on their sides and put them on a wall. That’s when I first worked with vertical images, but I haven’t done it for ages, so this project was very interesting.

MB This isn’t just a different format but an object too, a vertical monolith in a specific environment…
MK This isn’t a cinema situation, but it is a kind of. It has a stage, the screen is still in the room, you have speakers at left and right… I don’t think of this as an exhibition because the feeling of time is different. I would probably make a longer piece or a loop for an exhibition. Also the way of watching and moving around in an exhibition space is very different. I make lots of installations for exhibitions that might incorporate two or three projectors and objects in the space, so the geometric shapes become real in a real space. You have the virtual space and the real space. It’s about focusing on the architecture of the room. The Vertical Cinema project was less flexible. Of course you can put this screen in a gallery but I think the setup at Kontraste was ideal.

MB Was this your first experience with film material?
MK Yes! I hadn’t used a camera before. I started working with computers in a different context: creating textures for computer games when I was 17 for a project of friends of mine. At that time I used scans of my drawings and paintings that I converted into textures in a digital environment. The way the drawing or painting was transformed was very interesting to see. I continued working with computers alongside painting and drawing and so on…

MB How do you feel about this commission?
MK This is my first commissioned film. I’m very happy that people think about my work and want to include it in their programme. And then the second thing that made it special was that it really is a unique project. It’s incompatible with most spaces, and I like that. And being paid for it is the way it should be. Lots of artists work for ten years or more without any funding. It’s the same as receiving an award at a festival: you receive one and it takes ten years before the next one. But it always depends on the work. Some are more accessible for a mass audience and some not so much, so I guess that is also important.

Excerpt from V~ on Vimeo .