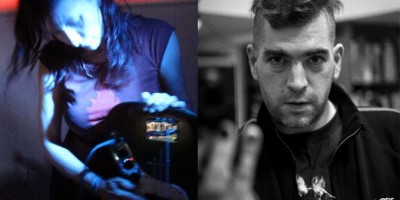 Billy Roisz (AT) specialises in feedback video and sound-image interactions, using various devices and instruments such as video mixing desks and a self-built video synth. She experiments with video and sound in the context of performance, installation, and cinema.

Dieter Kovačič (AT) is an avant-garde musician, programmer and video-artist. After appearing on several compilations documenting the Viennese avant-garde scene of the late 1990s, he released his first solo album in 2000. He composes music for theatre, opera and dance performances, videos, and installations.

Bring Me The Head Of Henri Chrétien!


There’s no sentiment as bold as the one in a duel shot in cinemascope. There’s no emotional drop height as big as in abstract vertical movies.

Billy Roisz and Dieter Kovačič explore the world of cinematic formats based on the genre that experimented with the width of the screen to display spectacular landscapes: Western movies and their wide span of (male) heroism between life and death. The music and imagery of Bring Me The Head Of Henri Chrétien! are thus based on Westerns and their soundtracks. Spaghetti Westerns such as Once Upon a Time in the West with their distinct epic atmospheres were a great source of inspiration and artistic booty. The largely abstract soundtrack amplifies and structures the story of challenge, conquest, success and failure.

Visually, Billy Roisz’ disquisition about the colours of 1960s and 1970s movies layers harmonically with Dieter Kovačič’s mostly monochromatic research into structural patterns in duels and carriage rides. The film is screened in vertical cinemascope and takes the format into account in several ways – e.g., the opening shot (pun intended) that morphs from horizontal to vertical cinemascope, or the panning shot across a horizontally mirrored landscape that makes the vertical display window act as a scanner – amplifying details in a decelerated movement. Finally, and in spite of all formal and aesthetic playfulness, Bring Me The Head Of Henri Chrétien! is nevertheless a classical Western movie. And its sequel could be a zombie movie with a similar title – who knows.

INTERVIEW WITH BILLY ROISZ:
ON THE EDGE OF TECHNICAL POSSIBILITIES

MB What inspired your vertical film?
BR Dieter [Kovačič] and I were thinking of how to deal with this new and challenging topic of verticality and cinemascope and trying to figure out how to work with it on a structural level. Although I make abstract films, they often have some kind of narrative. A classic gunfighters duel from a Western was the first thing that came to Dieter’s mind when we discussed the cinemascope format. So we decided to start with that idea and see if it lent itself to being rotated from the horizontal to the vertical.

MB How did you begin?
BR First we drew a storyboard, which was also the score for the music. Usually I create video from analogue audio sources, so we made the soundtrack first. I used our soundtrack to make two video tracks, abstract with black and white lines, and then I did the colouring in a video program. Dieter used found footage as the starting point for his video work.

MB Do you also work with found sound?
BR Dieter works a lot with found sound – that’s his ‘speciality’, as it were. His stage name is ‘dieb13’, which means ‘thief13’. The images he appropriates from other films are his contribution to the process of making our film.

MB You said your film is also an investigation of colour?
BR Yes, I thought I could add another very special element from 1960s and 1970s Westerns, that particular colour, a touch of brownish-orange, also the blue of the skies… I work a lot with colours, so this was my role. We worked in parallel. Dieter took film snippets from Once Upon a Time in the West and processed them. He did the black-and-white stuff and I did the coloured parts.

MB Can you guide me through the film?
BR It begins with the duel from the end of Once Upon a Time, while the audio is taken from the opening scene of the film. The film begins horizontally and at the moment the shooting starts it explodes into another dimension, the vertical. Then there are some very subtle transformations. The second part is actually like riding a coach through Monument Valley. In a normal cinema situation you would have a very broad landscape, while in our movie it is more like scanning the valley because you only see a very narrow slice. In this scene we hear a remix of a remix of a remix of Ennio Morricone’s music…

MB You worked with a Synchronator device, and Dieter worked with Data moshing. Can you talk about that a bit?
DK Data moshing is an artistic technique that extracts motion information from a video. Technically speaking, it removes all the key frames from an mpeg video, leaving the interframes intact, thus generating beautiful compression artefacts that resemble the original movements in a video without the original content. The Synchronator is a device that simply translates any type of electrical signal (in our case audio signals) to a stable video signal: sounds become visual patterns.

MB Where did the title come from?
BR Henri Chrétien invented the anamorphic widescreen process, which is the basis of the cinemascope format. We were looking for a Western-like title and Bring Me the Head… seemed perfect.

MB What were the challenges in working with video and then transferring it to film?
BR The power supply of Dieter’s computer burnt because there was so much rendering. It really was at the limit of our technical possibilities, even with a very fast computer. Working with this size and resolution and finding out how to make it possible with the right codecs… It was a big experiment in all aspects.

MB And the computer was the real victim, like in a Western…
BR Yes, it was shot in the duel! [Laughs] First we were busy with all the codecs and formats and anamorphic and 4K and 2K. After we finished, it still had to be printed to celluloid. We didn’t know beforehand that the colour spectrums of video and 35 mm film are very different, so actually this process transformed my colours again.

MB How did you collaborate?
BR Dieter has made lots of soundtracks for my videos and we have collaborated a lot on single screen works, experimental videos, and we also have a live project with RISC. In these kinds of projects Dieter is usually more responsible for the sound and I take care of the images. Here we said: ‘Yes, let’s try a new format’.

MB What are the differences between working on films and working on a live cinema performance?
BR In the films I start with a more or less fixed concept, so I’m a director. We improvise a lot in our live projects. We discuss the overall frame and what we want to do with a live performance. This vertical film is quite conceptual and we began with a concrete concept. Both of us are its authors, directors and composers.

Excerpt from BRING ME THE HEAD OF HENRY CHRÉTIEN! on Vimeo .