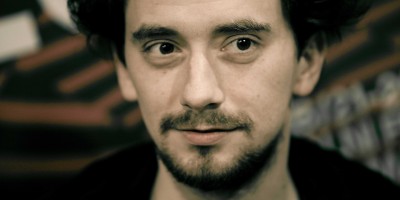 Johann Lurf (AT) studied at the Academy of Fine Arts in Vienna, and the Slade School of Art in London, graduating from Harun Farocki’s film class. His films Vertigo Rush (2007), 12 Explosionen (2008), Kreis Wr.Neustadt/A to A (2011), to name but a few, have been screened and won awards at numerous international film festivals.

Among the most mysterious man-made structures ever built, the pyramids still challenge scholars and provoke pseudo-scientific theories. Most architects have abandoned the idea of recreating a pyramid in modern times: first of all, it isn’t efficient as a building, and secondly, any content that might be assigned to it could hardly ever counteract its grandeur and ambition. So one could rightfully ask: Why build one today?

Pyramid Flare is the second in a series of experimental films about modern pyramids all over the globe. It was filmed in Prague and documents a pyramid-shaped building that is now mostly used as musical theatre. Filmed with a 35 mm camera turned on its side, Pyramid Flare is a five-minute exploration of basic cinematic elements – film formats, structure, movement, time.

The ‘pyramid series’ plays with these notions, each film takes a different approach to modern pyramid structures, and they all document the pyramid over the course of 24 hours. Structure is one of the keywords of the project, pointing to the mathematical structure of the pyramid and to the filmmaker’s approach to filming it. In Pyramid Flare the camera changes position every 20 minutes to capture the pyramid and the sun hovering above. It slowly circles the building, searching for the angles that keep the pyramid in the centre of the frame. Indeed, this conversation directs the film, leaving the director and his subjective point of view ‘out of the picture’. (Mirna Belina)

MB Why pyramids?
JL I like the ambition of the pyramid shape. I also like their simple structure – how they should look, but then how different they can appear in reality. They are also very recognisable landmarks. They strive for perfection and for power, of course. The shape is also odd: they stand in the landscape and don’t fit in. Maybe they are best suited to deserts because of the minimalism of the surroundings. A pyramid is a strange artefact. Its angle of 45 degrees to the sky is also interesting: most contemporary pyramids have a glass cladding, so they reflect the sky on all sides. They also change colour with the sky and respond to their surroundings more than other buildings, also because of their angle to the sky. They’re almost identical from every side, too. Basically, they look rendered, almost as if generated by CGI.

MB Can you tell me something about the series of films you’re making about contemporary pyramids?
JL The idea is to approach pyramids from the outside only for 24 hours, and use different methods and structures to get closer to them. I use several film formats and – depending on the situation and the format – create a framework of positions from where I want to film it. I’m working on photographic series of these pyramids as well. During my research I came across many modern pyramids, too many to film, in fact. The series of photographs document each pyramid from one side over the course of 24 hours.

MB How about the structure of your vertical film Pyramid Flare?
JL I always filmed towards the sun. This way the pyramid remained in the centre of the image and the sun was always above it. This was the most appealing for a vertical frame, or perhaps it’s only in the vertical frame that you can use this setup because the sun usually vanishes sooner from a horizontal frame. In a vertical film the sun can be kept within the frame for a longer period of time. The locations I filmed from were more or less fixed, meaning that I didn’t have complete control over the results, so I just recorded what I could. It was extremely difficult to find perspectives for Pyramid Flare because the surrounding area was quite closed off. So we took approximately three shots an hour, each shot lasting about five seconds, and then moved on. The repetition you think you see in some parts consists of similar shots from different angles – this is evident from the very small changes such as the sun moving ever so slightly between the shots and the changes in the lens flares.

MB How did you film Pyramid Flare?
JL I didn’t want to make a time-lapse film, so I used a regular camera. The first film in the series was shot on 16 mm and the negative was edited. I filmed Pyramid Flare in anamorphic cinemascope with a 35 mm camera, the way we projected it: turned on its side but in the opposite direction to the projector. That way when you lay the projector on its side the image is the right way up. I moved diagonally away from the pyramid for each shot while panning: this is two axes of motion already. And we zoomed in as we moved backwards as well, so the movements are quite complex.

MB What about the sound?
JL The camera doesn’t record sound so it was an additional decision. I could document more of course, but I don’t think it’s necessary, as I’m just collecting visual data of pyramids and their surroundings. Pyramid Flare is primarily about visual perception, and adding sound didn’t make any sense. For these five minutes it’s OK to stay concentrated. The camera movements draw attention to the pyramid, and I think the audience feels it as well. Sound would interfere with the focus on the vertical. Now it’s a very straightforward, direct way of exploring this verticality.

MB Your work with Vertical Cinema was not only as a filmmaker. Can you tell me about your role in the project?
JL I think the first conversation we had about it was in January or February [2013], not that long ago, if you think about it. Everything happened very quickly and I’m glad that it worked out this well. Using a new film format and finishing ten films in less than half a year is pretty amazing. I was asked to be a technical advisor to the Vertical Cinema project. Several ideas had already been suggested and we started discussing and testing them. We delved into technical details to see if it we could turn the projector on its side to maximise the frame-size of 35 mm film. Luckily, there are ways to do this. Erwin [van ‘t Hart] and Nico [Komen] from Filmtechniek, the company that took care of the technical aspects of Vertical Cinema, started modifying a projector and from then on I acted as a hub between the artists, the laboratory, and the Austrian film museum, where the films were printed. I had to make things work, collect the data, make the adjustments for printing on film… basically help wherever I could. Matteo [Lepore] and Adriana [Noviello] did a fantastic job of the printing! We also had to discuss the sound, and I had to check film prints for artists who couldn’t do it themselves.

MB How do you see this project in terms of the film/video dichotomy?
JL Those are very different approaches. The entire projector setup for Vertical Cinema is not easily comparable to anything. All the films would look completely different on video or as digital films! For me, analogue film has lots of restrictions but also lots of rewards and surprises. Of course, the results are unpredictable and you have to wait to see them because of the developing time, but this brings with it a different kind of appreciation.

Excerpt from PYRAMID FLARE on Vimeo . 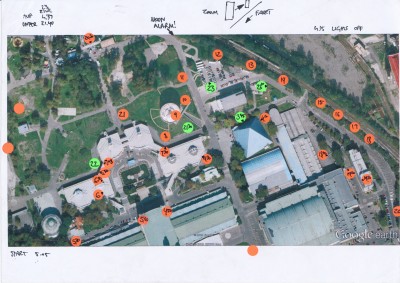 Making of 'Pyramid Flare': numbers stand for the time on location, colors for respectively daytime (red) and nighttime (green)