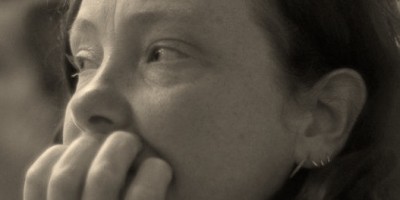 Esther Urlus (NL) makes Super 8, 16 mm and 35 mm films and installations. She creates new works by kneading the material, and by trial, error and (re)invention. She is the founder of the WORM.filmwerkplaats, a Rotterdam-based workshop and lab for experimental film and the DIY approach; this is one of the few places left in Europe where work can be done with Super 8 and 16 mm film. Her previous film, Deep Red (2012), also investigates colour mixing processes.

Chrome is inspired by the autochrome process, a colouring technique for black-and-white photographs invented by the Lumière brothers in 1903. In the autochrome process, microscopic grains of potato starch dyed red-orange, green and blue-violet act as colour filters. At normal viewing distances, the light coming through the individual grains blends together in the eye, reconstructing the colour of the light photographed through the filter grains. In Chrome the images created by this process are ‘amplified’, as if they are viewed through a microscope: a constantly moving noise of grains that forms shapes and outlines. The images have been created by applying homebrew film emulsion in grain structures to transparent 16 mm film with an airbrush. The resulting filmstrips have then been exposed and developed to black-and-white images. Layer by layer these images have been transformed to colour, resulting in teardrop-shaped figures that seem to be falling and fragmenting.

The super-enlarged grain structures create unrecognisable shapes and apparitions. The soundtrack was created with Huib Emmer, who created an electronic adaptation of a musical piece dating back to the time of Auguste and Louis Lumière, the pioneering days of photo- and cinematographics.

INTERVIEW WITH ESTHER URLUS:
BEYOND NATURE

MB Can you tell me about the technique you used in Chrome?
EU I’ve been working with different colour techniques for a few years now, and recently researched their origins. It started with early inventors and pioneers, not only cinematographers but also photographers. I also investigated the various emulsions. I was very interested in how these pioneers made colour on film. It was only in the 1950s that proper colour stock was made – it’s a very difficult process. My goal to make my own colour stock meant I had a better chance of finding solutions from the early years of film, when there were lots of experiments and everything was documented. It was a kind of open source, open access media. Everyone wanted to share their discoveries.

MB This is during the era of the Lumière brothers?
EU The Lumière brothers were among the first to actually file a patent for their inventions, including the Autochrome Lumière, an early colour photography process. I like Autochrome because it works with an illusion. You have a black-and-white photographic emulsion but you see colour. The colour was created by miniscule particles of coloured potato starch sealed between two glass plates. The black-and-white emulsion was applied to the back of one of the plates. So you had to take the picture through it. After exposure the black-and-white emulsion was processed as a direct diapositive. The layer of potato starch was still intact. Colours appeared when these glass-plate images were lit from below. The films of the Lumière brothers were made in their own factory and, in effect, were the first consumer films. But making films back then required money and time, as the process was expensive and time-consuming – I think the exposure time was one minute. The resulting images are very static but also very beautiful. The pioneers wanted to invent colours that were close to nature, at least to the human eye. The Lumières came close to achieving this but not quite, because they used orange, green and blue-violet instead of the standard red, green and blue additive colours. Colours made with this technique are beautiful because they surpass nature. This is where my project began.

MB What do we actually see in the film?
EU We aren’t even watching a moving image, except for the few parts where you see a figure falling down. What you see is airbrushed, light-sensitive homebrew black-and-white emulsion. I actually printed it to commercial film stock so it’s reversed. The particles become white instead of black and these are filled with colour, layer by layer, through multiple exposures. The main parts of the film were not made with a camera, they’re just colours printed in layers. The wonderful thing is that when you mix red, blue and green together on film it makes white light. The RGB colours also mix individually. The more layers you see, the lighter it gets. So it’s opposite to what we expect and learn from primary school on!

MB You control the rhythm by layering the colours…
EU I try to! Lots can still go wrong when the film is developed because I’m using materials in ways that were not intended, but it works.

MB Do you only work with film?
EU Mostly. The material is often the subject. I’m not fixed on what the camera sees, but on what the material does or can achieve: what happens if you work with colour material and use different processing methods such as direct positive or negative. The colours mix in two ways depending on the developing process: additive or subtractive. I like to experiment with these opposing outcomes. I used both of these processes in my previous film, Rode Molen: in one part in that film the colours mix to white and in other parts to black.

MB Do you have a special connection to the colour red? You always create spectacular reds, and then there is the recurring use of ‘red’ in titles like Deep Red and Rode Molen…
EU No, that has to do with the type of film stock I used, which is no longer made, Ektachrome. The results with it are beautiful. Red is a very strong colour for humans. Somehow our eyes detect it quickly. But I like blue as well… on film, not to wear. [Laughs]

MB What about sound in your films?
EU I work in a very DIY way. I do everything myself, but for Chrome I worked with a composer because I was very focused on the visuals. Deep Red was not soundless. The idea was that it would have the sound of the dust that accumulated on the film with repeated screenings. I’m used to 16 mm film and it doesn’t have a noise reducer or a Dolby system. So when you project your film, even if it came directly from a clean laboratory, you will hear the sound of dust or whatever particles end up on the stock. I made a special open soundtrack for Deep Red, the idea being that it would acquire more and more sound with each screening. But the noise reducers eliminated all the sound! So it was generally regarded as a silent film, which demolished the entire conceptual idea! I even recorded a ‘beep’ for the number 2, which is a cue for projectionist and the lab. But… silence.

MB This time you worked with a composer…
EU Huib Emmer and I had planned to work together for a while. I work with 16 mm, which is mono, but this film had to be stereo. Oh gosh, stereo! I can’t produce that! [Laughs] So I asked Huib. The tones you hear are the first three tones from the opera Samson and Delilah composed by Saint-Saëns during the early years of cinematography. There’s a short rhythmic passage that repeats and only the tone shifts. It’s basic repetition, the foundation of most music. I made loops of my material, and so you have a kind of a similar thing. If this optical part is run through a 16 mm projector it acquires noise or sound. We also recorded the sound of the moving film. So he actually made a composition using this noise with an occasional reference to the opera.

MB You’re active in the context of the DIY film world that always works and meets at film labs and workshops. What does this group think about the future of film?
EU There will be huge changes because the industry is no longer interested in analogue film. A major transition is underway right now. Film certainly has a future because it’s slowly becoming an art medium, an artists-only medium, without the mainstream film industry. A lot of manufacturers will disappear, film stock will be harder to find, but I don’t think this signals the end. Lab culture is actually growing. Interest in the material itself never disappears. I anticipate a movement towards 16 mm instead of 35 mm – but that’s because 16 mm is my thing.

MB Do you foresee a catastrophic end to an era?
EU More beautiful film stocks will disappear, but not all of them. Film stock recipes are still here and have proven their worth in the past 100 years. If this knowledge doesn’t disappear, it will be very easy to start anew. A good thing about the lab-artist culture is that we aren’t entirely dependent on the stock; there’s flexibility, ‘OK, it’s gone, so let’s see what we can do.’ In the worst case you start making your own stock. This flexibility guarantees that the medium of film will survive.

MB And archiving on film?
EU I think the future of the film lies in special stock that is made specifically for archiving. Under the correct conditions something archived on film can last for 100 years, so after 99 years it can be copied to another film and stored for another century! A great deal of data stored 10 years ago on digital media is often impossible to access nowadays, either because the equipment no longer exists or because of versioning or compatibility issues. I often think about how someone 100 years from now might react on opening the doors to a film archive and seeing all the rolls of film. It would probably take an hour at most for that person to understand what film is – it’s kind of obvious, isn’t it. But if you store raw data in a black box for ten years… there’s no clue as to what is inside the casing, and will you find a machine to plug it into so the contents can be accessed? Archiving is still done on film because it’s safe. If you want something to be preserved in good quality you have to put it on film. Actually Kodak recently produced a special stock for archiving, and DIY-ers are flexible enough to (mis)use it for their purposes.

MB How does the film lab culture function nowadays?
EU There’s a huge difference between the DIY film culture, which survives through cinemas, and artists working with film whose works are displayed in galleries. Unlike the art world, economics usually plays a minor role, or no role at all, in the DIY film culture. DIY lab culture and experimental cinema are based on sharing knowledge – like the pioneers of old. I advocate for a culture where everyone is keen to share instead of being protective. Globally these labs are getting better at collaborating and showing each other their works. These labs are for DIY-based Super 8, 16 mm, and some 35 mm film, and almost all of them can screen these formats. Digital files cause the biggest problems. Everyone goes: ‘Oh God, how does the beamer work!? So complicated!’ [Laughs] And although there isn’t longer a market for analogue film projectors any more – maybe a few 35 mm projectors are still available – there still is a future for analogue cinema because of this lab ethos of sharing and being flexible. Someone in Germany even built his own Super 8 film projector from Lego! The future could be even more exciting because now everyone can explore the analogue film medium without being burdened with commercial concerns. Besides that, film can be a very accessible medium because it’s so logical – you just have to try it out.

Excerpt from CHROME on Vimeo . 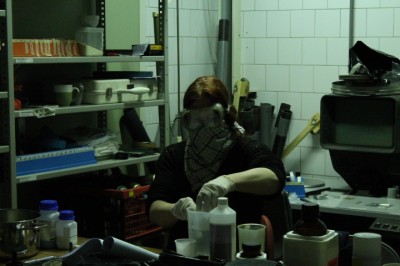 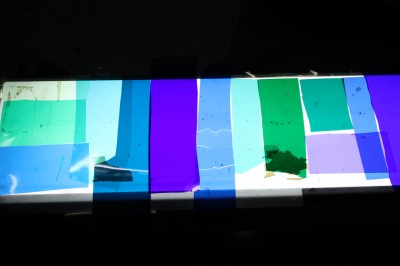