On September 5, Vertical Cinema was in Riga as part of the official Baltā Nakts programme. This edition of the annual all-night festival, which is Riga’s answer to Nuit Blanche, revolved around Light and saw a diverse range of performances, concerts, installations, lectures, workshops and screenings at venues across town.

The Vertical Cinema programme lit up Koncertzāle Rīga twice during the free double screenings that took place that night. The auditorium, with its ornamental stage and crystal chandeliers offered an interesting venue that showcased the vastness of the Vertical Cinema screen: it stepped outside the frame of the stage window and stretched up to the ceiling.

We want to thank RIXC, The Center for New Media Culture for hosting and co-producing the screening.

We also want to thank Mondriaan Fund and Riga City Council for their kind support. 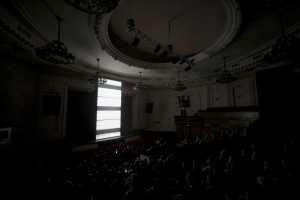